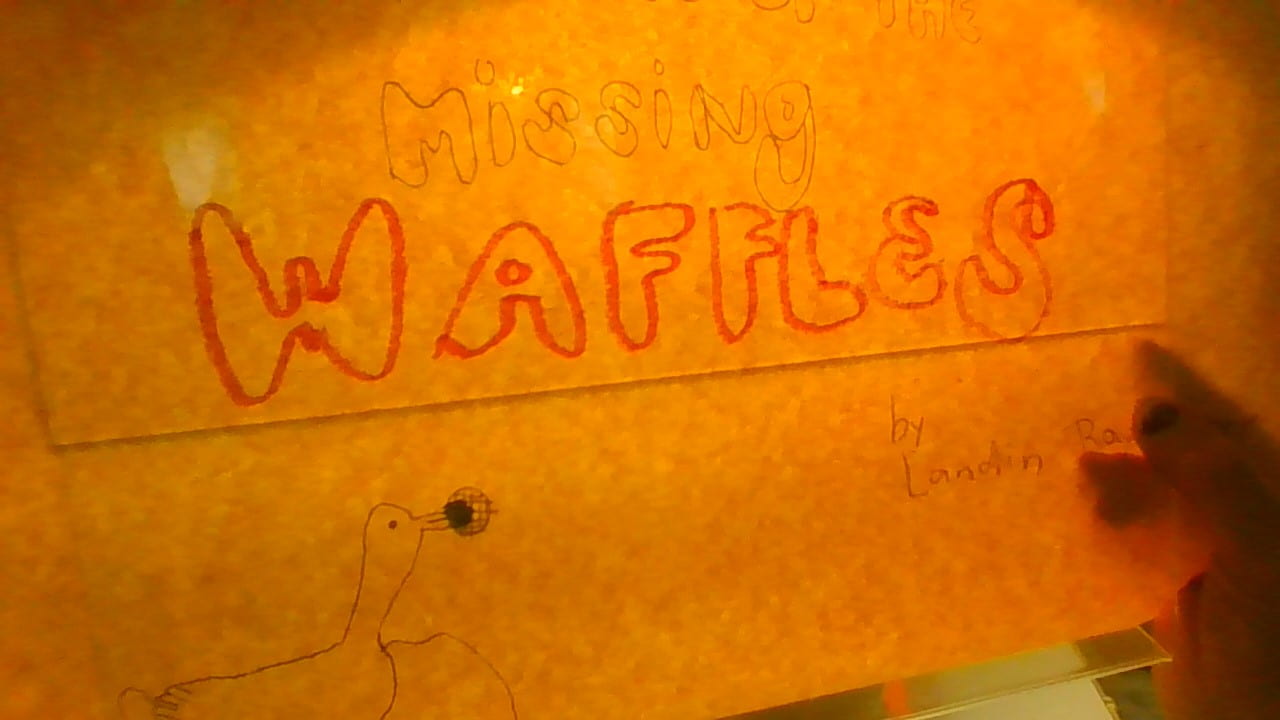 The Case of the Missing Waffles

It’s 10AM on a Saturday. It’s a sunny morning and Rose is sitting next to her favorite tree in the backyard of her house. Oliver, her little brother, is looking over at Rose.  They are waiting by the stream in their backyard. Soon their mom will be calling them in for brunch! Until then Rose decides to climb up. Oliver tries too. Rose is a really good climber. Ollie is still learning.

Rose notices that Oliver is missing one of his shoes. She doesn’t think much of it because it happens a lot. Just as she smells maple syrup, she also hears a crumple sound. Rose looks up to see a bag by the pond. She yells “ Hey Oliver look! A bag!! Lets go get it so we can recycle it”.

Rose notices Oliver’s other shoe as they are running to the bag, but she is too focused on the bag to grab it. When they get to the bag they hear Mom yell, “Kids come in to eat.”

Rose is eager to get the bag so she grabs it quickly and they go inside. At the table Rose notices there are pancakes but no waffles. Rose asks “ Mom where are the blueberry waffles?

Her mom says, “Good question I know I bought them. I’ll go check the trunk.” But when Rose looks out the window she sees one floating in the pond. Oliver sees it too. Rose knows that Oliver loves frozen waffles and she starts to put the clues together.  She wonders why Oliver would put the waffles in the pond? Did he take them?         Rose goes outside before her mom can come back in. Oliver begins to follow her. She picks up the first clue (Oliver’s shoe) then asks, “Oliver why is your shoe off and near the bag?”

Oliver says, “ The dog took it earlier and I couldn’t find it”. Rose does not believe him. She runs to where they saw the bag and looks at the pond. She is thinking about how this made sense when she heard the trunk close.

Rose and Oliver run back in to eat.  She tells her mom and explains about the bag. Oliver eats a lot of pancakes so Rose starts to think that it wasn’t Oliver. Oliver wouldn’t be as hungry if he had eaten the waffles.

Rose feels like a detective having to put the clues together

“Mom can I talk to Ollie alone?”   Rose’s mom seems curious, but she gives the kids some alone time, When Rose confronts Ollie she says, “Oliver, I can’t understand how the waffle got in to the pond.  Did you take them from mom’s car?”

Oliver says, “No I promise and anyway I’m so hungry, why would I be eating so much If it was me?”

Rose says to Ollie, “If you’re sure it wasn’t you, can you prove how the bag got from the trunk to the pond?”

Oliver thinks for a minute. “Yes I can prove it.  I just remembered after I brought in the groceries, I gathered up some old bread so we can feed the ducks later.”  He ran and got the bag from his room. “So I could not have had time to gather all of this bread if I was in mom’s trunk stealing the waffles. Also dad saw me ripping up the pieces when mom was pulling in from the store.”

Rose looked out the window.  This time she got an idea. “Oliver take a bite of your bagel and salmon then meet me outside. I think I solved the mystery.”

Oliver was still chewing when Rose yelled out, “Ollie remember the bag we found by the waffle?”

“Well,” says Rose. “You gave me the idea talking about gathering the old bread.”  She grabbed his hand and they run to the pond. Oliver seemed confused until Rose reminded him about the last time they fed the ducks!!! She says, “Remember we were climbing trees and noticed all the stale bread on top, we laughed because the ducks love the same things that we love.”

Just then the mother duck waddled up to them and quacked.  Rose could see some blueberry waffle stuck in her beak. At dinner Rose told everyone the story.

Oliver said, “It was the duck and our dog made me look guilty by planting evidence.”

Mom said, “I don’t think he meant to frame you Oliver.”

Dad said, “Can I make anyone an ice cream cone for dessert?”

Rose says, “As long as it’s not on a waffle cone.” They laugh until they notice the cones are missing!!